I’m not going to bore any of you with a definition of  onomatopoeia, because most of you already know, and if you don’t, it doesn’t especially matter. In my very first verse book that I wrote for Penguin (it was called In the Garden of Badthings and it was a long time ago) one of the verses is nothing but a collection of nonsense words. 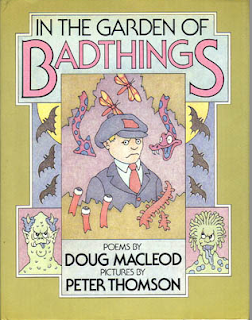 My first book of verse with Penguin. It's still in print, if you go for that kind of thing.


The verse is called A Swamp Romp, and, when read aloud, it’s meant to sound like trudging through a swamp. That’s all there is. There’s no sharp sting in the tail, and nobody dies in a peculiar way. (I was a little surprised when I read my second book of Penguin verse, The Fed Up Family Album. Just about every character ends up dying in a weird way. 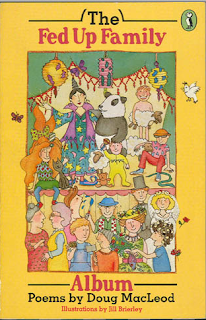 My second book of verse with Penguin. A complete bloodbath. The corpse count is higher than Romeo and Juliet, which manages to knock off all the teen characters except one.

People are devoured by shearing machines, or expunged by sculptures made of plumbing. One cousin meets her demise in a knitting machine, and another in a coffin perched on roller skates. It didn’t occur to me at the time that  the book is fixated on death, yet purports to be funny. A critic called David Tickell gave me a really hard time about it, and I now see why. I’m also amazed that I can remember such a dreary name as David Tickell after all these years. We pretend the bad notices don’t bother us, but of course they do. If David Tickell were a character in the Fed up Family Album he’d die a particular nasty and bizarre death, no doubt involving machinery. And yet he’s probably a perfectly nice person. We always pretend to believe that, as well. He’s obviously not a nice person. He’s a troglodyte, a reprobate and that 'c' word that I never use. CRITIC. We seem to have wandered off the point a bit. Here is the original version of A Swamp Romp as it featured in In The Garden of Badthings. (There's an illustration too but you really don't need to worry about that.) 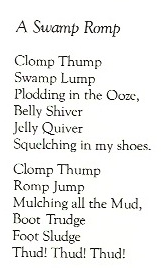 Makes no sense at all. Really doesn’t work unless you’re prepared to read it aloud and indulge a horribly precocious author.

To my knowledge, none of my work has been translated into any wonderfully exotic language, not even French. The Night Before Mother’s Day was translated into American English by the painless rendering of ‘Mum’ as ‘Mom’. I was surprised when Penguin told me that someone wanted to translate one of my poems into German. I was even more surprised when I learned that the poem they wanted was A Swamp Romp, which really can’t be translated from English, since it’s not actually in English to begin with. I wished them all the best and was startled to find out, eventually,  what a good job somebody had done of translating Anglish nonsense into German nonsense. Here’s the German version. (And German really is the ideal language to use if you’re going to create the impression of trudging through a swamp.) Eins, zwei, drei … 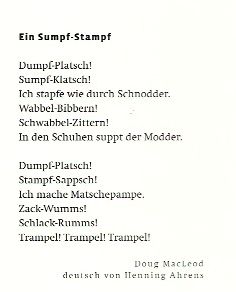 I'm immensely flattered that someone went to all the trouble of making English onomatopoeia into German onomatopoeia. Here's the German book … 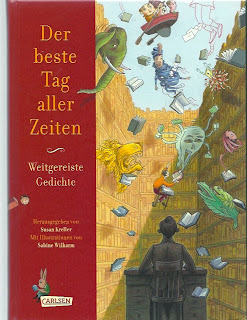 And here's the monster that apparently makes all those German onomatopoeic noises: 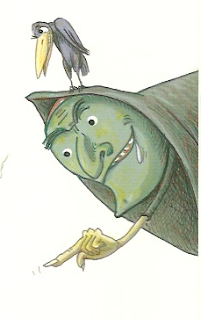 And here is the finished cover art of my next Penguin novel, Tigers on the Beach. It's due out early next year. 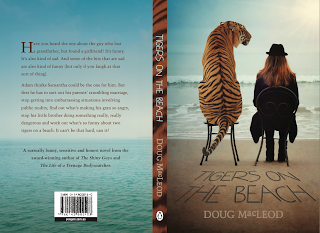 Pretty, isn't it? The book will investigate such topics as why there are so many weird deaths in a book that is meant to be funny (The Fed up Family Album, not Tigers on the Beach). Yes, it's a book about comedy.

As you know, I've loved "the garden" since I was a kid, it comes as no surprise to me that people like it, it's wonderful.