I learned with sadness that Terry Pratchett is suffering from early-onset Alzheimer’s. I think I have a taste of what that is like. This morning I managed to screw up two perfectly simple tasks. The first was to confirm that the Foxtel repair person was coming today to fix my clapped out Foxtel, as originally arranged. I rely upon Foxtel quite a bit at the moment, as the days drag by and I’m still finding it impossible to write and hard to read anything deeper than a Stephen King. Foxtel’s computer negotiated me through various departments and eventually I got to the customer service people. Why is customer service always the last option? And why do they always tell you at the start of the recorded computer stuff that ‘options have been recently changed, so please pay attention’? Surely the options can’t change that often? Anyway, I waited and eventually spoke to a lovely man called Darryl in India (I suspect ‘Darryl’ might have been an alias.) Anyway, there was a breakdown in communication (my fault). Rather than confirm the appointment, I managed to cancel it altogether. So I rang back, sat with the computer for ten minutes, then desperately tried to reach Darryl and tell him I had made a huge mistake. I wanted to reverse the decision that had been made by accident. No way was that happening. I had to make a new appointment and the Foxtel man will now be coming on Sunday morning. So, it’s just two days more without Foxtel. No big deal but how the hell did I manage to cock things up like that? I also renewed my membership with The Australian Society of Authors but gave them a credit card number that was quite wrong. They rang me back about that not half an hour ago. How did I manage to get three of the digits wrong? I had the card right in front of me.

These seem like tiny things to you, and indeed they are, but I make stupid mistakes like this every day. I’ve obviously reached a part of my stroke ‘recovery’ (they assure me I’m getting better) where I am useless at positively everything. No wonder they won’t let me drive. I’m really not bothered that my short-listed book, The Shiny Guys didn’t win the big award. I forgot when it was all supposed to happen and I didn’t know the books with which I was competing. But cancelling the Foxtel man when I already had a perfectly good appointment does bother me, because it seems the sort of thing a mentally impaired person would do. Suddenly I’m living in Mother and Son and I’m Ruth Cracknell. How long will it be before I put something inappropriate in the fridge, to gales of laughter from the polite and surprisingly indulgent ABC studio audience? I never liked the show and now I like it a whole lot less. This weekend, will I forget the rule about Mormons or Jehovah’s Witnesses and invite them in? Will I walk down to Fitzroy Street and give away my money to everyone who asks for it? (A lot do. Though it’s dropped off lately since I started walking and talking like – well, a stroke victim. I guess even the junkies must realise that someone who looks like an extra from The Living Dead is probably unlikely to have anything on him that’s worth taking.)

But, aside from a rather rapid descent into dementia, things have been okay recently. I did my Book Week talks (no more than two in a day, because that’s all I can manage before I close down). The schools were all delightful hosts. I even got a present from St Kilda’s very own Christian Brothers College. I nearly teared up. That’s something else I’ve been doing lately; crying when I shouldn’t. I guess all the drugs I’m taking make me a bit hyper-emotional. I cry at Sherlock Holmes stories. Toilet paper ads. Funeral insurance ads where they tell me that my funeral could cost as much as $20,000 and they imply that if I don’t pay a weekly premium to them, then I would be leaving my penniless children to a life of prostitution and drug-taking.  (Okay, they didn’t actually say that, and I don’t have children, but I still found it sad enough to weep.) It drives me crazy that Penguin wants to call my next book The Opposite of Funny. And it really shouldn’t drive me crazy, because I realise there is no way a publisher would make itself look so utterly stupid by putting out a book with a title like that. Why not just call it Don’t Buy This Book? The first title was Tigers on the Beach, which is why Karen Scott did this amazing cover art: 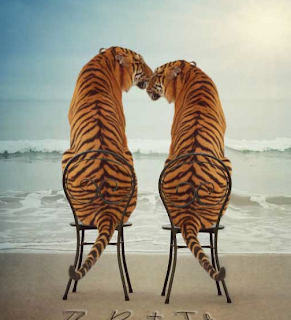 I know the book isn’t as good as the Body-snatcher book or even The Shiny Guys, but I don’t have the brainpower to make it better. My brain isn’t sharp enough for me to be an author at present, which is why I’m relying so heavily on my editor, Amy Thomas. She’s good, but I think I need to be taken to task more often. I miss my old editor Dmetri Kakmi because he was quite hard and often I had to justify and fight for the choices I’d made. Here is a typical example of Dmetri editing a page from one of my YA novels. As you can see, he’s fairly ruthless. 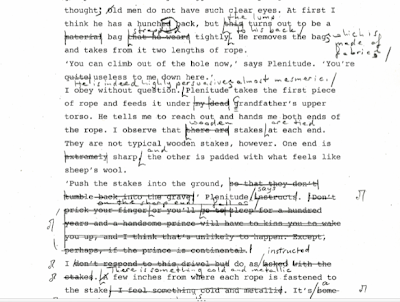 But I kept my cool with Dmetri, we found some good solutions and we both of us did the final draft together. I don’t think I’d be able to keep my cool at the moment if I was in a cover/title meeting at Penguin. I’d probably cry. God, it’s all so embrrassing.

Anyway, this afteroon I get to see my neurologist, Dr Palit, to talk about all the terrible crap that has been happening and how we might go about fixing it. Maybe I really do have early onset Alzheimer’s?

Speaking of funny, or the lack thereof, I went to give blood this week. It sounds benevolent but it’s because I have too much iron, and it needs to be taken out from time to time, or apparently I'll get liver cancer. I think it's actually illegal to stick in needles that are bigger thank that. It stops being medicinal and becomes voodoo. But for some reason, the nurses always find it very hard to find my veins, which is why my arm has trackmarks. (Probably another reason that Fitzroy street people no longer ask me for money. They’ve all got arms like mine. I’m a brother!) Behold my arm. You can just see the grey mess of trackmarks. 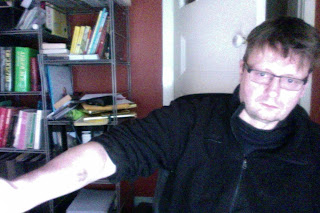 Anyway, the nurses were making it hurt more and more and I was starting to tremble. (It really is a bloody huge needle they use – 4mm, about the diameter of a roofing nail.) One nurse fancied himself as a psychologist and asked me if my trembling was the result of immense pain or the anticipation of immense pain. I confess I was at a loss to answer. Finally, after about a dozen attempts to find the veins in my arm, they decided it would be a good idea to give me a local anaesthetic, which is only a small needle that doesn’t hurt, thus numbing the area before they started plunging in that 4mm roof nail. The doctor who was performing the venesection was a charming Indian man with an expert bedside manner. He kept moving my arm gently and making me hold it out. I had my eyes closed, but rapidly opened them when the back of my hand brushed the groin of his trousers. I felt uncomfortable, but the  Indian guy didn’t seem to mind. I asked him if it was okay to have my hand where it had ended up. He shrugged. It was fine, so long as got the blood out of my body. Then I pointed out - half jokingly - that when I give blood I usually have to squeeze on something like a small rubber ball to assist the flow of blood. The doctor laughed and said, ‘I have nothing here for you to squeeze’. He really did say that, and i thought it was funny, which is why it's here.. Sadly he was the only witness. And given my stunning ability to cancel Foxtel appointments accidentally, or misread something that is right in front of my nose, I don’t make a particularly reliable witness myself.
Posted by DougMacLeod at 6:12 PM 2 comments: