Last Friday I got my progress report for my stroke recovery. I've been lucky. That cubic centimetre of brain that was damaged is currently being bypassed by my clever neurons, finding other ways to make my body work properly.
My brave Uncle Ron had a stroke last year and it robbed him of his tastebuds, among other things. I seem to have retained most of mine. Food still tastes like food. Mind you, I still find it tricky to balance on an inflated rubber discus. However, this is something I rarely have cause to do. I have just found out something rather alarming about myself. This has nothing to do with my stroke. My neuerologist looked at my CT scan and announced to me that there was good news and bad news. The good news is that there is no damage to the left frontal lobe of my brain - the part that acts as a self-censor. It stops us from doing or saying dangerously stupid things. It is, in effect, a moral compass. Apparently Sarah Palin was born without one. The right frontal lobe is the more sensible one - the one we use when doing mathematics, solving problems. The bad news is, according to my scan (see below) I apparently don't have a right frontal lobe.

See the big white space on the top right corner of my brain? That's where my right frontal lobe should be. It's just a big puddle of water. We're not sure how I managed to misplace an entire frontal lobe, but apparently the left one is the really important one and it's in great shape.
Good heavens. I've just re-read my blog and notice that the last entry was a long poem about Queen Elizabeth getting stoned. I can't imagine what I was thinking. Maybe the right frontal lobe is the one that tells you not to post poems about our head of state on drugs. 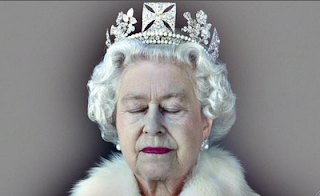 Posted by DougMacLeod at 2:59 PM 3 comments: