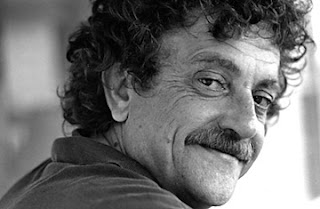 After he achieved such massive and belated success with Slaughterhouse Five, Kurt Vonnegut told journalists that he had written a new book called Breakfast of Champions but that it wasn't good enough to publish, so he was prepared to put it aside, away from the world's gaze. But of course, he did publish it, because it's unbearable to think that what took up so much of your life is going to make you no money. And he was right. Breakfast of Champions wasn't a good book. It was turned into a movie and that wasn't any good either. But worse was to come; Slapstick being the one that people tend to bang on about. And then, just when everyone thought that old Kurt Vonnegut might never write another good book, he came up with Jailbird, then Galapagos, then Bluebeard. Three great books, almost in a row. Deadeye Dick came between Jailbird and Galapagos. It wasn't too bad, but Jailbird was a tough act to follow.

I've read everything I can about Vonnegut. I will read both biographies, when they come out on 9 November this year. 9 November is the late Mr Vonnegut's birthday. What I'm hoping to find out is how he managed to survive the slump, the time when he really wasn't writing well.

You see, I'm in the slump at the moment. I'm irascible. I have only just this moment been rude to Allen and Unwin editor Erica Wagner, who is so supportive and wonderful that no one could have any reason whatever to be rude to her. I'm spending too much time on Facebook and actually bothering about what people are saying about me on Goodreads. I didn't even know about Goodreads until I read Steph Bowe's blog and learned that Goodreads is a social-network-type book appreciation/evaluation website and apparently something important. At present I go to Goodreads almost daily to see if there might be some new reviews for The Life of a Teenage Body-snatcher, the book that became invisible on the day it was published, until The Children's Book Council of Australia made a decision that still amazes me and put it on their shortlist. It's pathetic that I should worry about what someone called 'Tamsinette' thinks of the book. And yet, the fact that Tamsinette (okay, not her real name) gave it only two stars out of five on Goodreads does bother me, especially as there is no review or anything. Just two measly little stars. By the way, Steph has heaps of well-deserved good reviews on Goodreads. She also has a couple of undeserved stinkers and I bet I know which ones she is able to quote word for word.

Then there's the terrible envy. It seems that every author colleague that I know on Facebook is going to at least ten times as many festivals as I am. Why is my publisher devoting less time to me than the million other writers in their stable? How come I've never been a guest at The Melbourne Writers' Festival, except for the time that a well-meaning Leigh Hobbs tried to pull strings for me and accidentally landed me a gig talking to kindergarten kids at Artplay? (This was after my book about body-snatching came out, and it just didn't seem right to talk to them about it.) That sort of thing never used to bother me all that much. It does now, because I'm in the slump. And I'd much rather be jetting around the country talking to teens and adults about how wonderful it is to write, rather than actually doing it. Vonnegut did a lot of that too. He gave some spectacularly funny lectures to university students (with whom he enjoyed cult status) when he probably should have been back in his studio making Breakfast of Champions a better book.

Or perhaps not. Maybe Breakfast of Champions was never going to be a good book. Writing a novel, despite the well-meaning half-truths we often tell students of our craft, is a very risky exercise. It's not like a short story or a fifteen minute TV script, either of which you might be able to knock over in a few days. It's a commitment to creating at least fifty thousand words that tell an engaging tale, with well-rounded, interesting characters. So it makes sense that after you've risked months to write this thing, you very much want it to work. If it doesn't work, you can't bear the idea of throwing it away. You think of all the times you told your family and your friends that you were busy writing a novel, which served as an excuse for any sociopathic behaviour on your part. You can't confess to them at the end of three months that you haven't written a novel at all, and that you've merely typed fifty thousand words. Because if you tell them that, they'll realise that the reason for your sociopathic behaviour could well be that you're actually a sociopath. So you return to that novel, time and again, hoping for that Eureka moment where you stumble upon an idea so good that it will make the novel work. There's a Eureka moment in The Life of a Teenage Body-snatcher, not that Tamsinette with her lousy two stars would realise. There's a really good Eureka moment in Siggy and Amber, which you probably haven't heard of, but it's a novel I wrote quite happily (though not effortlessly) when I wasn't in the slump. Meg Rosoff, another of my favourite writers, had her Eureka moment when she realised that her first book How I Live Now wasn't gripping enough. She said jokingly to a friend that she should set it in World War III. That was her Eureka moment.

I have a novel that I started five years ago. Let's call it Bob. It's had many titles, none of them Bob, but it's easier to type than, say, The Life of a Teenage Body-snatcher. It took me three months to write the first draft of Bob, and I kidded myself into believing it was good, even though it wasn't. Perceptively, my editor sent it back. Since then, Bob has gone through around ten drafts. It has never gifted me the Eureka moment. Now it's taken a year of my life and it's still no good. It looks like a novel. It has the structure of a novel. It obeys the rules of character and conflict and resolution and all that stuff that we talk about to students. But it simply isn't interesting enough. There are thousands of jokes, because I know I can do those, but I'm belgiumed if I can make this novel work. And so, at last, in an effort to get over my slump, I am writing this post as an obituary to Bob so that I can move on to pastures new and maybe even compose a decent novel. I won't be sorry to see the back of you, Bob. And it will give me great pleasure if, in future books, I am able to yank out some of your vital organs and recycle them. It's definitely farewell, Bob. Although ... maybe if I set it in World War III? 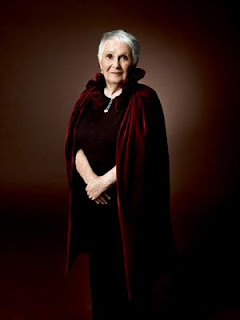 I posted a version of this before. It's a work in progress, a musical based on the life of Margaret Fulton, written by composer Yuri Worontschak and yours truly. We started eight years ago and got some interest from The Melbourne Theatre Company. They gave us some money to record the songs and write a first draft. The show is currently in limbo, though it's gratifying that Margaret is finding a new legion of fans with her work on shows like Masterchef. And she's been wonderfully patient about the whole project. Here are some of the songs, with appropriate scene-setters.
The Things That You Can Do. As part of the Leaving Certificate in the forties, Australian girls had to learn to be perfect housewives. This involved such tasks as doily-making and using a flat-iron. Being able to handle a then-defunct household appliance was considered a vital part of an Austalian girl’s education. Margaret hated it and couldn’t wait to get away. (Sung by Mark Trevorrow and Shaun Micallef.)


Jam. In 1955 Margaret Fulton joined advertising firm J Walter Thompson as an account executive. The Menzies-Fadden government had given money to the ailing Queensland sugar industry, with the result that there was an oversupply. Margaret devised a campaign to sell the sugar mountain. It worked, and she became the first corporate women in Australia ever to be given her own line of credit. (Sung by Queenie van DeZandt and Mark Trevorrow.)


The Book. In 1967, Margaret started work on the famous cookbook. She was optimistic that it might sell a few thousand copies. It ended up selling over a million and topping the bestseller lists. At a signing session in Sydney, people queued around the block. Every second home in Australia had a copy of The Margaret Fulton Cookbook. (Sung by Joanne Campbell and Mark Trevorrow.)

Mandrake the Magician. One of Sydney’s first legal eagles was a woman whom Margaret knew socially. A fan of comic book hero Mandrake the Magician, the QC came to a fancy dress party dressed as him. At the party, Margaret first learned that her partner, Denis Doonan, was having an affair with ‘Mandrake’. (Sung by Queenie van DeZandt.)


I Sang For My Supper. Today Margaret is a political activist and remains outspoken on the plight of Aboriginal and Torres Strait Islander children being forcibly removed from their families. She is also an active supporter of Greenpeace. She still lives in Balmain and loves cooking. (Sung by Queenie van DeZandt.)
Posted by DougMacLeod at 3:04 PM No comments: